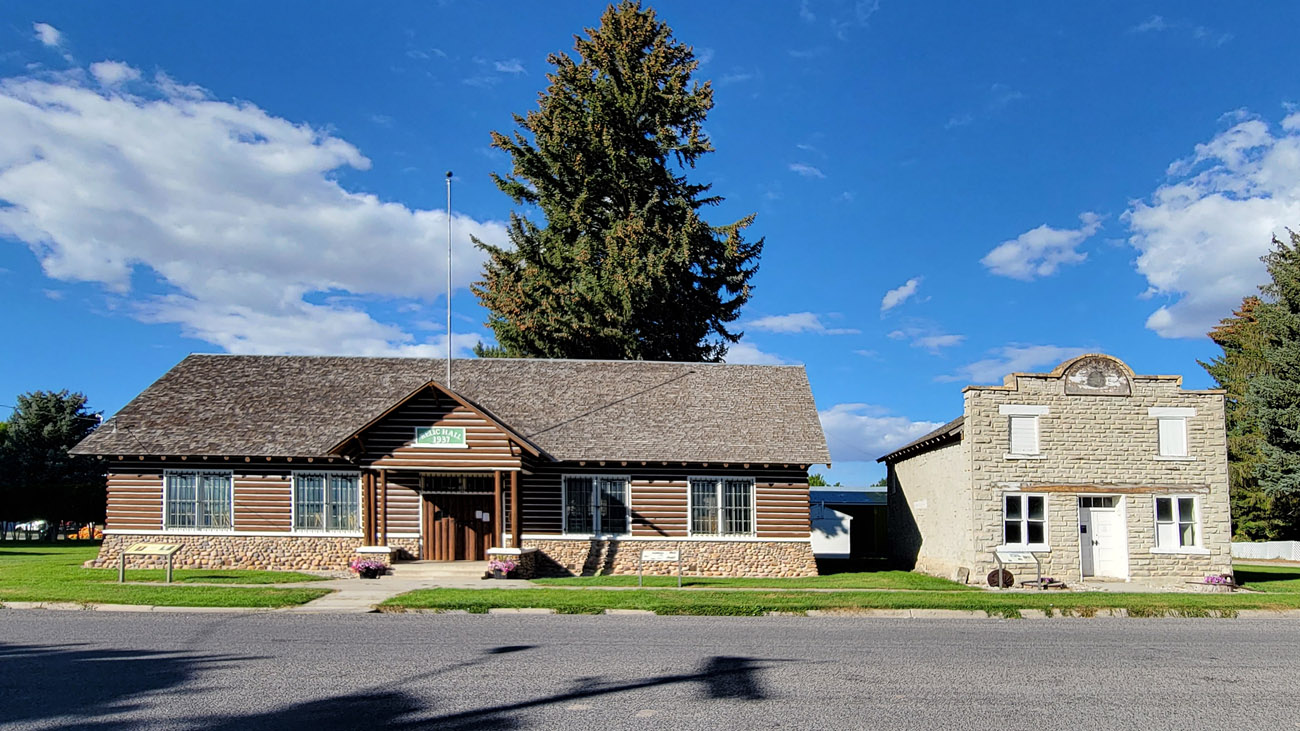 Open summer only. The oldest continually settled town in Idaho, Franklin was founded in 1860 by Mormon pioneers. Several original buildings stand in the historic district: the Relic Hall, the old ZCMI store, the Hatch House, and others. The Old Yellowstone Route is just outside of Franklin where stagecoaches full of tourists once traveled on tours to Yellowstone National Park. Start at the Relic Hall 1/2 block off of Hwy 91 on East Main Street.

The town of Franklin was founded in the spring of 1860 by Mormon pioneers moving north through the Cache Valley of Utah. Sixty-one families built small cabins along the Cub River (at that time called the Muddy River) and commenced farming.

Settlers fanned out to establish new communities in northern Cache Valley. These early pioneers believed they were still in Utah, and not until 1872 did an official boundary survey fix the Idaho-Utah border a mile south of where Franklin was established.

In a typical Utah pattern, the first settlers laid out wide streets and held a drawing to distribute town and farm lots. Town lots were large enough to accommodate a garden, barn, and outbuildings. Space was reserved for a central square — which today is the Franklin City Park, located south of the State of Idaho properties for which the Idaho State Historical Society is responsible. The Relic Hall is open to the public from Memorial Day through Labor Day and at other times by appointment. The Franklin Cooperative Mercantile Building, which primarily houses Mormon history of a local and denominational nature, is open periodically, mostly by appointment. The Hatch House is closed. In 1923 the Franklin Pioneer Association bought the old Franklin Cooperative Mercantile Building, located on Main Street one block east of U.S. Highway 91, to use as a museum. After running out of room in that facility, the Association deeded a building lot to the State of Idaho located adjacent to and west of the Mercantile Building, hoping that a new building would be constructed on the site.

In 1872, Lorenzo Hill Hatch built his elegant stone house on one of Franklin’s largest lots on Main Street, across from the city square. Hatch was the town’s temporal and spiritual leader from 1863 to 1875. He was the second Mormon bishop and the first mayor of Franklin. He was also the first Mormon legislator in Idaho.

The stone Greek Revival style of the house was popular in Utah in the 1870s and the structure was occupied by descendants of Bishop Hatch until the 1940s. It was acquired by the Historical Society in 1979.When ownership of the house was assumed by the State of Idaho, the ground floor had been completely gutted by the previous owner. Extensive modifications had been made to the ground floor, which was raised approximately seven inches, and all interior walls were removed. The house is still in that condition.

The second story survives with little modification and could be restored to an 1870-80s appearance in the future. A 1910 addition, made of a hard yellow brick, housed a new kitchen and pantry, later altered to a bathroom. This section of the house has been altered by the previous owner The legislature appropriated funds for construction of a rustic log hall, which was built in 1936-37 from timber provided by the Forest Service and labor by Civilian Conservation Corps crews. The Idaho State Historical Society has been responsible for maintaining the Relic Hall building since its construction.